Our faithful companions can be the source of terrible smells. When does it become a problem and what do we do about it? Is it as simple as changing his diet to another kind of dog food? If it is, what is the best dog food for flatulence?

Almost nobody is talking about Victor, but it’s one of the best dog food brands for less flatulence (affordable, too!). Here’s what you can expect: 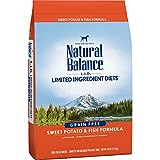 This is one of the best dog foods you can buy for any dog for any reason, period. But does it work for anti-gas? Here’s what real-world Natural Balance feeders are saying:

There is an old story about the boyfriend coming to Sunday lunch at the girls’ parents’ house (a big deal in our neck of the woods).

He enjoys the food tremendously but then the gas starts troubling him. He discreetly lets it go, but oh my word, it stinks to high heaven. Luckily Father leans over and sternly rebukes Old Yeller who is lying quietly under the table. Boyfriend now comfortably releases a few more and Old Yeller is getting all the blame. After the third episode, Father again leans over and says:

“Old Yeller, you better stop farting or this boy is going to stink us out of the house!”

But the fact is, our faithful companions can be the source of terrible smells. When does it become a problem and what do we do about it? Can it be as simple as tweaking diet to another kind of food? If so, what is the best dog food for flatulence?

Note that we’re talking about “excessive” here – it is normal for dogs, just like humans, to pass a little gas now and then.

Gas is produced in the large intestine as a natural byproduct of the digestive process. The problem arises when it seems that all that the dog does is stink up the house all day long.

It’s no use getting mad at it, it really can’t help it! Rather try to find out why it is happening, then you can try to address it. Even if you can not eliminate the smelly occasions completely, you may be able to reduce it to tolerable levels.

The most common causes of excessive gas production are of course something to do with its food, but there are also other causes. Some of the causes could be :

Are there specific foods that give dogs gas?

Low-quality pet foods contain a lot of stuff called fermentable fiber. Just like the term says, it ferments, and thus produces gas. Examples of such fiber are:

Diseases that cause flatulence

Sometimes excessive gas is a symptom of something much more serious than food or food intolerances. There are a number of diseases that have flatulence as one of their symptoms.

If your dog has one of these diseases, flatulence will not be the only symptom. Watch it closely for other general indications of failing health such as belching, vomiting, diarrhea, weight loss, changes in appetite, and/or lethargy.

Are there breeds that are more prone to flatulence than others?

I seem to remember that every English Bulldog that I have ever encountered was a walking factory of foul smells. It seems that may not have been a subjective impression.

Brachycephalic dogs, in other words, all those with shortened jaws and squashed heads, are prone to snorting, snuffling, snoring, and yes, farting. This is due to the fact that they breathe through their mouths instead of their noses, thereby swallowing lots of air.

Sometimes that air contributes to flatulence.

Many of those with chronic obstructive respiratory syndrome also have associated digestive problems, leading to flatulence.

The Kennel Club of the UK lists breeds that are brachycephalic as:

Brachycephaly is not limited to purebreds but any crossings that they may give produce as well.

Other breeds that could be prone to flatulence are German Shepherd, Mastiff, Labrador Retriever, and Doberman Pinscher.

Even the little Chihuahua. Pfffft.

If you have any suspicions that your dog’s flatulence may be caused by disease rather than food, your next stop is the vet.

It is not a good idea to try to medicate your dog yourself.

They can not tell you what is wrong and you may be making it worse rather than better if you try to treat them.

Remember that old saying: The way to Hell is paved with good intentions.

Firstly, you should always study the ingredients list before you buy any dog food, whether dry or wet, bagged, canned, or whatever.

One of the simplest ways to judge a dog food’s ingredient list is that the fewer ingredients there are in the food, the better.

This is a subjective statement, but really, how many additives do you want in your dog’s food?

And are you sure you know what they all are?

This brings up the issue of limited ingredient foods. These dog foods have either fewer ingredients in total than the standard for the brand, or it has fewer sources for major nutrients.

A limited ingredient diet (LID) is often prescribed for dogs with specific health issues, and digestive problems are one of those.

There was a big scare that a LID may be positively linked to a type of heart disease called dilated cardiomyopathy (DCM). The warning went out, especially against a grain-free diet. This debate is not over and the FDA is still investigating.

At the moment the trend is still that it is the better option to have one source of protein and one source of carbohydrate in the food, instead of several. This composition also simplifies the procedure to discover what food ingredient causes flatulence or allergies or other conditions in dogs.

Right. You’re reading the label. It is short but you do not understand half of it.

After telling you that you must read the list of ingredients I also have to tell you that the ingredients label may not be accurate.

In the industry, they call it mislabelling.

The Food and Drug Administration (FDA) in the USA has strict regulations regarding the naming of pet foods and has sued dog food manufacturers in the past for mislabelling. But the cases get complicated and you are still left with the problem of which brand to trust. I can’t help you there, you have to do your homework and make a decision.

Remember how the ingredients list is supposed to work: The ones at the top of the list make up the bulk of the food, while those lower down are present in lesser quantities.

Sounds easy but it’s not, because some ingredients are actually more water than anything else, especially raw protein. So it is very misleading to have it at the top.

How do you go round that one?

The AKC has a comprehensive article on how to interpret dog food ingredient labels.

It tells you what to accept at face value, when to do a bit of calculation yourself to understand the true level of the ingredient, and gives advice on how to decide if the food is appropriate for your particular dog.

Some ingredients have names that no ordinary person can understand. Pay particular attention to them! Butylated Hydroxyanisole (BHA), Butylated Hydroxytoluene (BHT), and Ethoxyquin for example, are preservatives that are on the list of known carcinogens and reproductive toxicants!

And all you want to do is reduce your dog’s farts – not pollute its body with chemicals. Rather look for natural preservatives like vitamin C and vitamin E.

There are also some labels that appear quite innocent but are not.

Anything with “meal” included means it is sourced from the parts that can not be used for anything else – lungs, spleen, kidneys, brain, livers, blood, bone,and lots of other stuff you really do not want to know about. Really.

In other words, not the muscle that we associate with the word “meat”. If you are happy with the thought, go right ahead.

The best dog foods that will prevent or at least reduce flatulence turns out to be pretty much the same foods that you would choose for a  wholesome, healthy, and nutritionally complete diet.

What does all of that mean?

But what constitutes high quality, if you cannot even trust the labels?

To recap, the source of the smelly gas is the fermentation by the internal bacteria of whatever reaches the large intestine. It follows that the less stuff the bacteria get to digest the less stinky gas they will produce. That means that the food you give must be highly digestible. As much as possible should be digested and taken up by the body before it gets to the large intestine (colon).

One of the indications that digestion is incomplete, is when your dog leaves mountains of poop around the yard.

The more poop there is the less of the food is actually assimilated in poor old Rover’s body. You give him buckets full but it all just passes through!

In spite of red meat being a potential source of smelly gas, it is highly digestible.

In fact, the Protein Digestibility Corrected Amino Acid Score (PDCAAS) of raw red muscle meat like beef scores 0.9 out of a possible 1.0 (This is a method of evaluating protein quality).

This procedure has its limitations (for instance it is applied mainly to human foods), but it is worth mentioning so that you do not think Rover is not allowed to eat any red meat ever again.

A study that compared various aspects of a few commercial dog foods to raw food found that the protein digestibility of a moderately cooked, grain-free dog food was significantly higher (94.6 %) than the raw food (88.3 %) or the extruded food (85.1 %).

The purpose of the study was to find evidence that a raw diet is better for your dog than commercial food, but the overall findings are of interest if you want to address other problems such as flatulence.

So maybe you can spare yourself all that reading and calculating and just buy a special food. It is possible that it may solve your problem.

High protein is important, but the protein should not be too high! Dogs are omnivores, not carnivores. That means they can not live on proteins alone. Just like humans, they do need some other nutritional sources besides proteins. Although it is ultimately the quality of the protein that is the most important factor, there is a general guideline that more than 30% protein in dog food is too much.

To reduce flatulence choose foods that are highly digestible, has the phrase “complete and balanced” on the package, has identifiable and simple ingredients, has natural rather than chemical preservatives, and is produced by a well-known, long-established and respected manufacturer. And keep checking with your vet – he or she studied for years to be able to advise you. Use it!

Do I need to consider my dog’s age when trying to address flatulence by changing diet?

Probably not. Yogurt is a dairy product. Adult and senior dogs have very little or no lactase to digest the lactose in yogurt. So the chances are good that it may increase the problem. However, unsweetened yogurt with live bacterial cultures may help. It is best to experiment and watch your dog closely.

The Editorial Staff at Dog Breeds List is a team of dog breed experts. Trusted by millions of dog lovers worldwide.