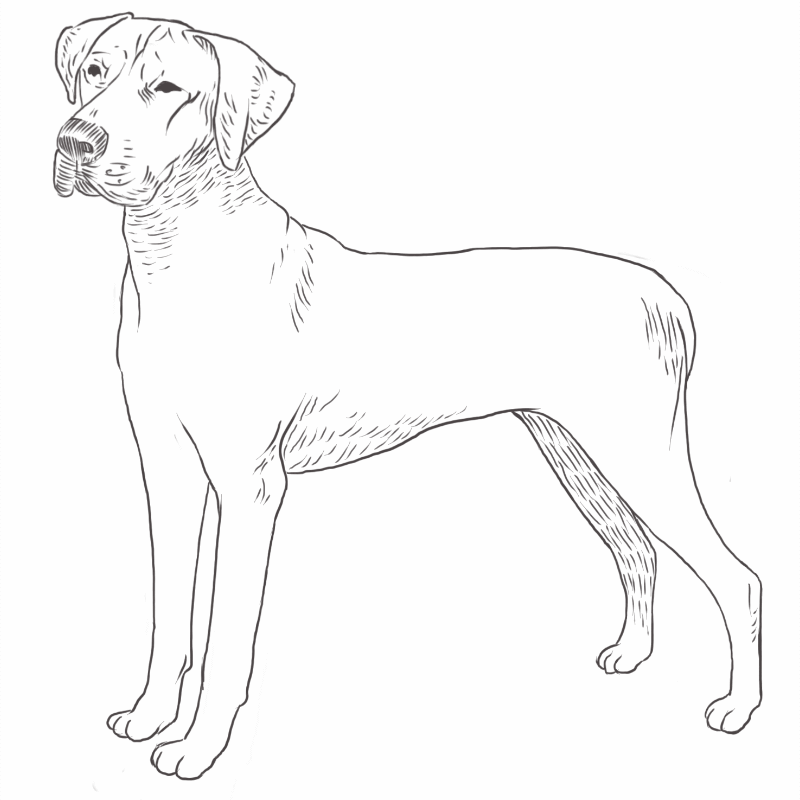 Rhodesian Ridgeback: Have you ever wanted to own a dinosaur? Well, now’s your chance! You may not have heard of him before, but the Rhodesian Ridgeback is the dog breed for you. He may not be a Stegosaurus, per se. But he’s basically got the body of one!

That’s right, he’s called the Ridgeback for a reason. This dog actually has a strip of fur along his spine that grows opposite to the rest of his sleek coat.

Just like a dinosaur isn’t everyone’s cup of tea, neither is the strong-willed Ridgeback. 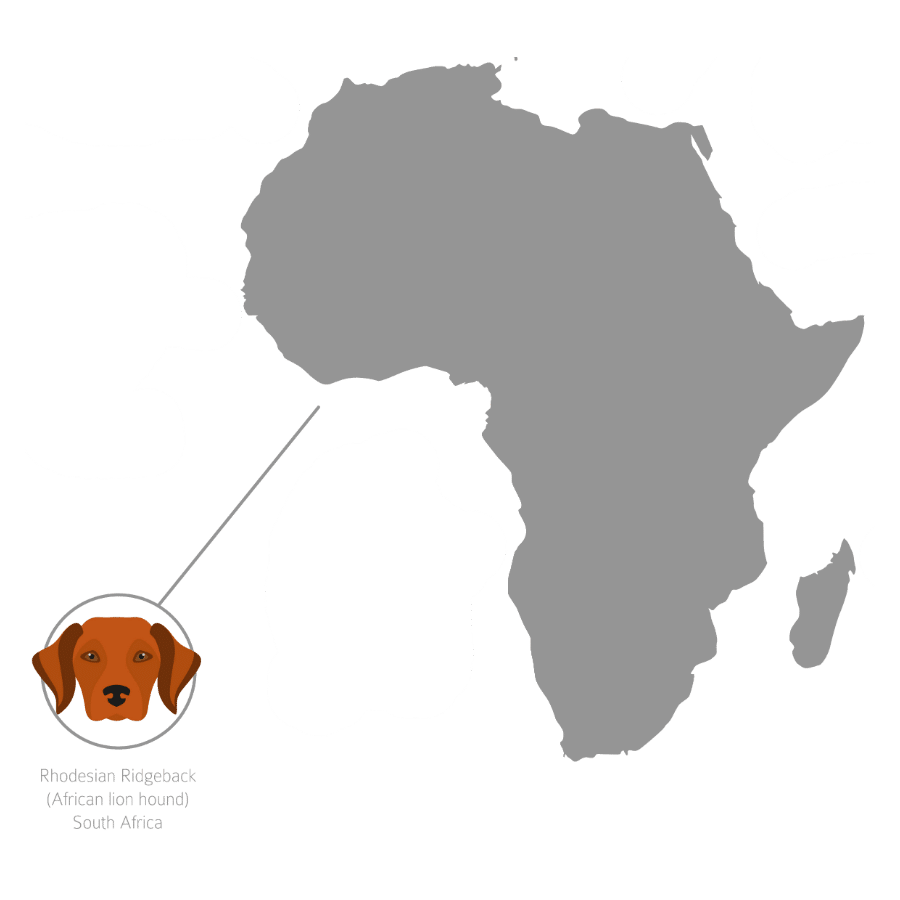 The Rhodesian Ridgeback isn’t the best-known dog in the world, but a local legend. When I was a kid in the country, everybody’s dads had one of three dogs:

Ridgebacks were bred in Africa for Africa and their story is worth telling.

The origin of Rhodesian Ridgebacks is shrouded in uncertainty and speculation. The name refers to:

Ridgebacks were not developed only in Rhodesia.

Contributions to the gene pool came from South Africa, Zaire, Angola, Tanzania, and Zambia. Reverend Charles Daniel Helm and Cornelius van Rooyen are given lots of credit in establishing the breed.

Their main crossbreds were with Boer mongrel dogs (Boerhond) and the Hottentot Hunting Dog.

But it is not as simple as that.

The best clue to the Ridgeback’s ancestry is the ridge. This distinctive feature results from three very specific genes, which are found only in another two breeds of dogs:

It may have been bred to “bay” lions, but the Rhodesian Ridgeback needs as much loving care and attention as any valued family pet.

It needs good quality food, shelter, companionship and a private place for its toilet.

Yes, these fierce dogs do not like doing their business in front of an audience!

Choose a high quality dry dog food (no cornmeal or other fillers).

Canned (wet) food is also fine if you get the calories right but you will need to pay more attention to teeth problems.

Do not overfeed your Ridgeback!

You must always be able to see its waist. And it’s not just a fashion statement!

Watch the calcium in your puppy food. Too much may lead to improper development resulting in hip and elbow dysplasia.

The short dense coat of the Rhodesian Ridgeback is easy to care for.

Brushing with a bristle brush once a week, and when it is visibly dirty (e.g. dried mud), should be enough to keep it sleek and shiny.

Do not bathe too much – only when it is really dirty. Pretty boy!

The Ridgeback has naturally floppy ears, which can be more prone to infection. Check and clean with a cotton ball when necessary.

Despite its heritage, the Ridgeback does not need an excessively rigorous exercise regime.

Walks at least twice a week are good, but he does need to go off leash once in a while to run like the wind. A large backyard for him to romp in is a necessity.

Ridgebacks are not particularly good at games.

It will fetch a ball once, maybe twice, and then leave it. It has already done the job twice and it does not see the point of doing it over and over again. Ridgeback psychology is geared to spend energy towards survival, not to perform tricks. This has led to a reputation of being stubborn when really he’s just being practical.

Puppies younger than 6 months should not be exercised too much. Natural playing and running should be sufficient.

Successful training starts with the requirement that you MUST understand what makes them tick.

Simple positive reinforcement will almost certainly not be enough. They do not take well to monotonous or heavy-handed training techniques.

Remember, this dog is not a Labrador.

He does not associate pleasing you with insensible tasks. Do not make the mistake of confusing their intelligence with obstinance and even stupidity.

An aspect of extreme importance is that the Ridgeback must trust you first. That means he must know that he can rely on you to act consistently, intelligently and fairly.

Ridgebacks are ruined by inconsistency, a lot of jerking of collars and harsh physical corrections. They respond extremely well to clicker training because it allows you to make them understand exactly what behavior they are rewarded for.

This is the ticket.

Ridgebacks think, and think independently. Acknowledge it and work with it or be faced with withdrawal.

Rhodesian Ridgebacks have a lifespan of 10-12 years.

They are sturdy, strong and generally healthy dogs. A well-looked after Ridgeback will be a fit and happy hound.

However, there are some conditions that they are prone to, that you need to know about:

1. The Ridge is Genetic

The genetics are complicated (homozygous, heterozygous and all sorts of other big, but important words). What you need to know is that a puppy that is born without a ridge will never have a ridge.

It will NOT grow a ridge later!

Or when it gets excited. Do not believe a breeder that tells you such nonsense!

Breeding two ridgeless Rhodesian Ridgebacks together will result in an entire litter of ridgeless.

Always. Forever. That’s how it works!

If anybody tells you different they have not kept proper records of the breeding. Somewhere a ridged mate has deposited its genes. Or else they are trying to sound clever thereby just confirming that they’re clueless.

Ridgeless Ridgeback dogs are valuable carriers of the genes that contribute all the good characteristics of the breed.

They do not deserve to be euthanized. Drowned. Killed. “Eliminated from the gene pool”.

In fact, responsible scientific research shows that by only breeding with double-dominant ridged dogs (you have to look it up, it is too much to explain here) you may be promoting the risk of dermoid sinus.

2. The Ridge Does Not Always Look the Same

As a child I recall most Ridgebacks being called “Paplepel”.

That’s because the whorl immediately behind the shoulders was usually the classic shape. That is two crowns symmetrically opposite each other, which together with the long extension down the spine makes the whole look exactly like a traditional African wooden porridge spoon.

There are all sorts of other shapes, and you need to look at the standard to determine what shape you need in order to be able to show the dog. If that’s what you want.

Among the original Boer owners, the shape of the whorls was the least of their requirements. It all became very fancy pants only later.

Black, said Henry Ford about his new-fangled motor car. Not so, the Ridgeback.

Yes, shame. Not the kind of hue to spark wide-eyed admiration.

Today it’s called wheaten or buff. They come in various shades of wheaten, like red wheaten (deep mahogany is beautiful but rare). In South Africa, the red color is the best-known and is used most often in descriptions of this dog.

A note: many sources on the Internet talk about the original Hottentot dog being a kind of ancestor of the Ridgeback. Well, in 1731 a fairly good description of the dog (including the nondescript color) only mentioned that its hair stood in all directions, not specifically in a ridge, and that it was indeed a very scruffy thing.

5. The Ridgeback in Literature

There are a number of factual books about Rhodesian Ridgebacks. Their history, care, breeders’ info, and accounts of specific dogs that have made their mark in human families. But there are also stories and legends:

He had a Rhodesian Ridgeback named Gompo.

Nothing is really known about this dog except for a famous photograph taken of the two of them together in the years before Mandela was captured.

The Rhodesian Ridgeback has its very own Code of Ethics for breeders.

8. Even so, You Could Call it a Mixed Breed

The FCI (Fédération Cynologique Internationale) classifies the Rhodesian Ridgeback as a scent hound. However, it has characteristics from several additional breed groups namely molossoids (mastiffs), terriers, pointing dogs, and sighthounds.

The AKC, the Canadian Kennel Club, and The Kennel Club in the UK put it in the “Hound Group” that includes both scent and sighthounds.

But then there are arguments that they also qualify to be classified as a Cur-dog, a Wagon dog/wagon hound, or a Ridged Primitive.

Remember the Thai Ridgeback and the funny name dog from Vietnam?

They are both rare so how does that gel with the occurrence of the Rhodesian Ridgeback? Seeing that the ridge is genetic and all? Who came first, or did it just so happen that the ridge popped out in dogs of three different geographical locations?

Even if the Phu Quoc ridgebacks originated from a Thai Ridgeback like many websites claim, where did the African version come from? Find the definitive answer and you could become rich and famous!!

9. Ridgebacks can be Trained for Performance Events

Even if your Ridgeback is not interested in being taught “fetch” it can be taught other forms of play.

Ridgebacks excel at lure coursing and agility – two activities that utilize their natural talent to a T.

Of course, that means you need to be fit and fast as well…puff, puff, oh my this is hard work! But such fun and the dog it to bits!

Something amazing about Ridgebacks is that they do not need to be taught how to herd. They instinctively know what to do! It is the most astounding experience to take a Rhodesian Ridgeback to do a herding instinct test and see how he works, without any prior experience.

There is a difference between herding stock and chasing them around, and the Ridgeback makes no mistake! Despite the fact that it is not classified by the American Kennel Club as a herder breed!

10. A Wine Estate is Named After Them

Ridgeback Wines is named after Ridgeback dogs, not a series of hills or any other such speculations.

It is located on the northern slopes of the Paarl mountain in South Africa. Paarl is the third oldest town in South Africa and the area is well-known for the production of rich, full-bodied, spicy red wines and crisp white wines.

It also boasts viognier, mourvédre, white pinotage, and a  tempranillo, tannat and tinta amarella blend. You’ve got to be a very old dog indeed not to be tempted to have a sip.

Yummmm! Feel the hairs rise on your back!

Yes, it sounds fantastic. It came about because it was a hunting dog. It was used to keep wounded animals (lions, leopards, elephants) rooted to a spot (“at bay”) until the human hunter could catch up and give the final killing shot.

However, it never killed lions.

The dog would not have a snowball’s chance in hell against a lion, especially a wounded one, and the dogs are clever enough to know this.

Interested in an exhaustive description of lion hunting with all kinds of dogs including Ridgebacks?

Read “Five Years of a Hunter’s Life in the Far Interior of South Africa” by Roualeyn George Gordon-Cumming (1820-1866).

He was known as “The Lion Hunter” and some of the legends surrounding his hunts are astounding. He was bigger than life and some of the stories about his exploits are better taken with a pinch (or two) of salt.

Ridgebacks were also called Van Rooyen’s Dog. He was the first breeder who tried to breed the dogs to show specific characteristics.

Call it what you will.

Forget whether the ridge arose as a spontaneous genetic mutation or came from Indochina via Arabia. The Rhodesian Ridgeback is a noble, strong, loving, intelligent, aloof, but fun dog to have.

It is different from any other breed you will ever know.