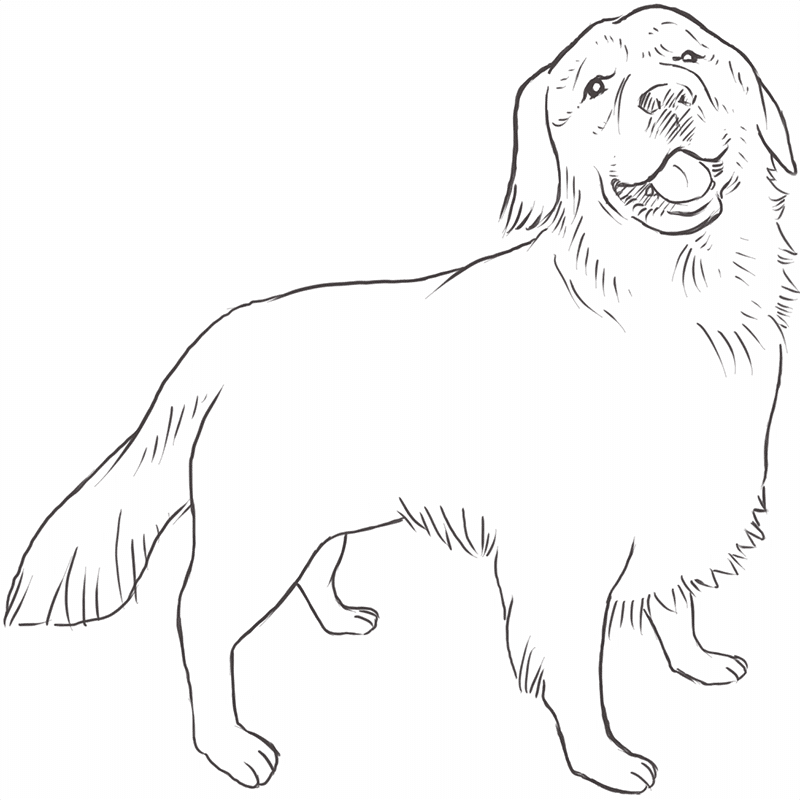 Golden Retrievers have earned themselves a reputation as a loving, caring, playful breed of dog ideal for family life over the years. While it’s true that their personalities coupled with their love of the outdoors can make them the perfect canine companion.

…it’s always important to understand the ins and outs of your pup’s breed.

And for Goldies, understanding their history and health can go a long way to help you care for them.

Golden Retrievers are one of the most popular breeds of dogs in the US, and yet for a long time, there was confusion about their origins.

There are a couple of strong contenders when it comes to the stories of their beginnings. All of them start with one man — Sir Marjoribanks.

Initially, Sir Marjoribanks claimed he had purchased Russian circus dogs sometime in the late 1800s, bringing them to his home in Scotland.

Noting their strong ability for gamekeeping, at some point, the dogs were bred with a sandy-colored Bloodhound to reduce their size and improving scenting. This also had the added effect of creating their sandy coloring.

It seems that in 1865 he bought a puppy called ‘Nous’ in England (from a cobbler in Brighton). It was the only golden coated pup in a litter of black retrievers. The golden coloring is a recessive gene in Retrievers, and therefore very rare, but Retrievers as a breed have existed since the 16th century.

The puppy was quickly absorbed into his kennel of sporting dogs on his estate because Retrievers are natural gundogs.

Lord Tweedmouth later crossed Nous with a Tweed Water Spaniel (a now-extinct breed) and the result is now believed to be the Golden Retriever.

Their Tweed Water Spaniel combined with their circus dog heritage made for an ideal gundog, particularly in the wet and often swampy climate of the Scottish Highlands.

Yes! Golden Retrievers can be the ideal family pet because of their calm and patient nature.

While they suck at being guard dogs, they can be good watchdogs though their love of other people means you never need fear bringing over new friends or home a new child.

If your family also loves to be outside and active, Goldies can be the perfect companion.

They’re generally considered an all-arounder when it comes to dog traits, and as such, they’re one of the most popular breeds in the US.

Because of their popularity, buyers should be cautious when seeking a new pup.

The rise in demand for Golden Retrievers has seen people cross breed them, resulting in dogs that are not technically Goldies and, as such have unpredictable temperaments.

If you’re raising a family, you need to know if Golden Retrievers bite because you need to feel safe with your dog. The short answer is no, but you should always interrogate breeders to understand the puppy’s lineage.

As any die-hard owner will tell you, while Golden Retrievers are often perceived as easygoing family dogs they require more care than most new owners realize.

This is especially true when it comes to their nutrition and health.

Here’s a closer look at how to care for your Goldie.

Eating the right kinds of food with a complete and balanced diet can help ensure your Golden Retriever stays healthy.

With Goldies, you’re going to want to make sure they get enough protein among other ingredients.

Your Golden Retriever needs a lot of protein.

Finding a food with as much as 30% protein can help ensure that you’re taking care of their muscular bodies.

While you should make sure you’re feeding your Goldie pups enough, many vets also caution against overfeeding.

Goldies are a smart breed.

Many pups can, once they’ve figured out how much they enjoy mealtimes and food, end up constantly asking for more food. Because Golden Retrievers are a larger breed, however, overfeeding can lead to excessive growth spurts (or growing pains).

These growth spurts can lead to hip and joint problems in later life.

If your pup is constantly asking for food, and you know you’re giving them the right amount of nutrition, consider adding more enrichment or mental activities to their daily life as a source of stimulation.

As with any dog, you should never bathe your Goldie too often as this can lead to dry skin and reduce the water repellent oils they build up in their coat for swimming.

That said when it’s time to bathe your pup you’ll find that Golden Retrievers love water and you won’t find it hard to coax them into a bath.

How often you bathe your pup should be determined by their lifestyle — the more muddy and active the dog the more often you might want to bathe them.

Much like other water breeds, Goldies actually have two coats, so your grooming schedule should include regular brushing.

This has the added benefit of spreading out their natural oils across their fur — they need these for water-based activities anyway — and maintaining a healthy coat.

Golden Retrievers were originally bred as working dogs so they tend to love exercise.

They typically need at least an hour of exercise a day, although some need more and some need less.

The easiest way to tell if you are exercising your Goldie enough can be determined by how destructive they are in the house.

Provided they’re not also suffering from separation anxiety (which is common) an under-exercised pup will tear up your house out of boredom, literally bounce from the walls, and may even chew on the furniture.

Golden Retrievers also tend to be natural diggers, so left to their own devices they will easily give your garden a makeover if they’re under-stimulated.

An additional reason to make sure you’re exercising your Goldie enough is that Golden Retrievers adore food.

It’s very easy to overfeed them because of their endearing nature and tendencies to always want more snacks — many even have crafty begging routines they’ll use on all of the family!

By taking them on a long enough walk and stimulating them you’ll make sure they avoid obesity.

The good news with Goldies is that you don’t have to keep to one exercise — fetch is also an ideal activity.

While not every dog is born a retriever, some Goldies don’t have the urge, with most pups you’ll notice your Golden Retriever is naturally inclined towards fetching things.

This harks back to their ancestors who spent their days in the Scottish Highlands helping gamekeepers retrieve fowl during a hunt.

They rarely feel the cold water because of their coat, making swimming a great exercise for them. Many Goldie owners also enjoy swimming with their retrievers.

Golden Retrievers are renowned for their ease of trainability.

Most owners find this a breeze (and fun)!

Their ability to think fast and independently while obeying instructions is what has made them so ideal for working.

Far beyond what was ever envisioned when they were bred as gundogs in the 19th century, Goldies nowadays are also given tasks such as guide, therapy, drug, or bomb dogs.

While your Goldie may never be a working dog, training your pup to sit, heel, and not pull on the leash can be invaluable.

Most Goldies are kind, friendly, and confident, but it’s their confidence combined with their curiosity that can sometimes lead them into trouble. Because of their love to learn and explore, Goldie pups need to be treated much the same as babies and supervised at all times until you’ve trained them.

You can start training your Golden Retriever pup from as early as 8 weeks old.

They’re naturally eager to please you and patient to boot, and so you’ll find them easier to train than other breeds.

As with any pup, the key to training your Goldie is to start with basic commands and never generalize.  In addition to obedience training, teaching your Goldie not to bite and nibble is an important part of your journey with them.

When you’re obedience training your pup, try to start with these basic commands:

When you’re training your Golden Retriever it’s important to understand that their temperament plays a huge role in their training.

Goldies are patient and eager to please, so training is for the most part easy. However, Golden Retrievers are also trusting and love socializing, which makes them very poor guard dogs.

Trying to train them to do something that’s outside of their personality is incredibly hard, so always be aware of their own strengths and weaknesses.

There are actually several subtypes of Golden Retriever internationally recognized — among those are the show dog and the working dog.

The working dog tends to be muscular, and as a result more agile. With both breeds, the average lifespan is around 10-12 years and the health issues to watch out for remain the same.

As with any purebred dog, there are a few health problems that come with the dog. There are several health issues to watch out for with this breed:

Golden Tip: Spay your Golden Retriever to reduce or even eliminate her chances of getting certain cancers.

Ultimately, the health of your puppy depends on their breeding — are they purebred or not? — along with their lifestyle.

If you know your Goldie’s heritage and breeding this can go some way to helping you know which conditions you might want to watch out for.

Things to Know About Golden Retrievers

While they’re well known to be playful, Goldies are are very capable of learning agility.

Because of their natural affinity for working, you’ll find that your pup might be ideally suited for tasks that require brains as well as brawn.

Teaching your dog agility can have the added benefit of providing mental stimulation, ensuring they don’t get bored in the house.

2. There are Three Varieties of Golden Retriever

Canada, America, and the UK/Europe all have different varieties of Golden Retrievers.

While they’re all the same color broadly speaking, they each have their own differences:

Goldies were bred to enjoy the water!

Their excellent and natural ability to swim makes them great at jumping off docks.

Many owners love to take their Golden Retrievers to the beach or to lakes on vacation because of this reason.

Their love of digging can make beach walks and getaways a particularly fun activity too.