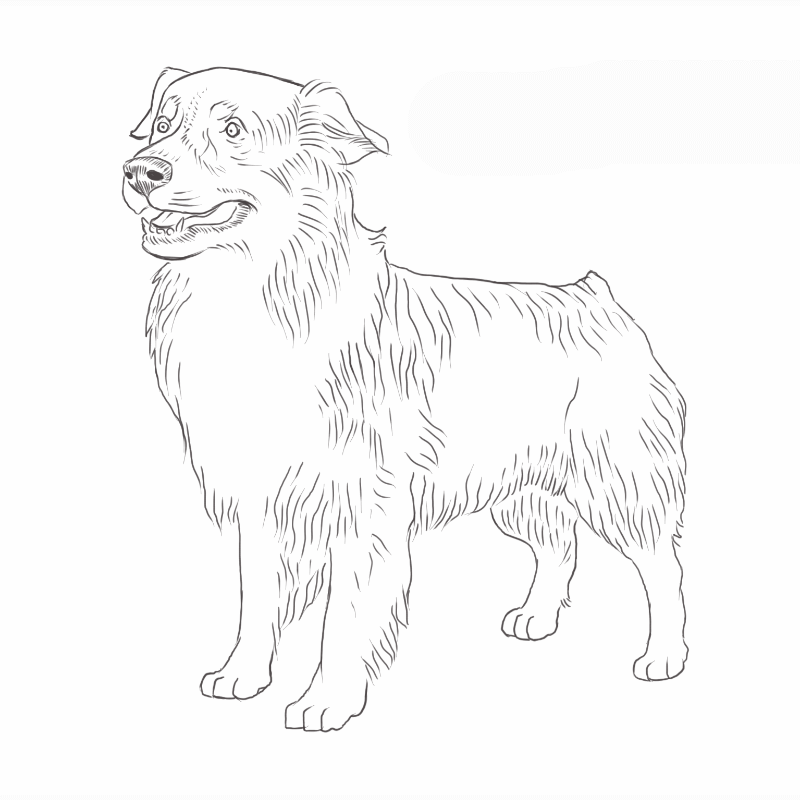 Best known for their speckled coats and striking eyes, Australian Shepherds are a highly popular dog breed. For many, their gorgeous looks and protective nature make them seem like a very attractive breed to own.

Australian Shepherds might look like gorgeous dogs, but there’s actually a lot that goes into caring for these energetic dogs.

Here’s everything you need to know about Australian Shepherds.

Many people think that Australian Shepherds originated in Australia but this is not the case!

This breed actually comes from the US, although the ancestors of Australian Shepherds likely came from across the globe.

The reason they’re known as Australian?

This is probably because of the popularity of Australian sheep in the US in the early 1900s — a breed that Australian Shepherds would herd.

Many agree that Australian Shepherds most likely a mix of Pyrenean Sheepdogs and several other herding dogs. These Spanish Sheepdogs came from a region known as Basque in Europe, somewhere between Spain and France in the rolling hills of the Pyrenees Mountains.

Some people think that there’s also clearly Collie DNA in the Australian Shepherd — you only have to look at both of their coats to see the similarities. There are also many arguments for other dogs thrown into the mix with this breed — for example, some believe that Australian Shepherds are in part descended from a breed of dog called German Tigers, known today as Australian Koolies.

All of these dogs most likely accompanied shepherds who immigrated to America in the 1840’s during the gold rush. While the origins of this breed may be unclear, what is clear is that Australian Shepherds are a strong mix of herding dogs.

It’s likely those who immigrated to the US in the early 19th Century took with them only their best sheepdogs, and the resulting mix of all of those dogs was the Australian Shepherd, which first appeared in the 19th-Century in California.

Because of their breeding, Australian Shepherds fast became renowned for their high energy, endurance, and herding abilities. It wasn’t long before they were fully ingrained into livestock handling across the US.

Aussie pups are well known for being ‘easy puppies’ to handle but it’s important that you make sure you’re giving your Australian Shepherd the appropriate level of care as they age.

Here’s a closer look at how to care for your Australian Shepherd.

As with any breed of dog, you’ll want to make sure your Australian Shepherd is eating the right kind of food.

In general, Aussies weighing about 50 pounds need around 1400 calories a day as a minimum but you’ll find that growing puppies and those with more of an active temperament need more food for fuel.

There’s no one size fits all approach to feeding your Aussie — this breed is famed for its individuality — but in general, you’re going to want to make sure your dog gets all of these in their diet:

Some Aussies have food allergies, so it’s also important to pay close attention to what you’re feeding them.

Grains are by far the most common type of food that could cause an allergic reaction. The symptoms of allergy can seem quite similar to fleas — they include itching and scratching that can cause hair loss. If you have a good flea removal regime in place for your dog it could be time to examine their nutrition.

Australian Shepherd grooming shouldn’t be an ordeal. As a natural adventurer, your pup is going to get covered in the kind of mud and grime that accompanies their active outdoor nature.

There’s no reason to balk at the idea of grooming them, though!

Brushing your dog is the single most important grooming you can carry out.

Your Aussie is going to pick up much more besides mud — twigs and insects for a start — so regular brushing can really help keep them in top condition while ensuring boat their coats (yes, Aussies have two coats!) avoid matting.

When you brush your dog you’re spreading their natural oils, which in turn smooths their coat, while you help them with their shedding. Some carry this out daily, while others do this on a weekly basis. The regularity of brushing should match your dog’s coat and needs.

As for bathing, like any dogs, the amount you bathe them should be determined by their lifestyle. For a working dog a bath once every 2-3 months is more than enough. Bathe them more than this and you risk drying out their skin too much.

Because Australian Shepherds are natural herders, meant for livestock, the primary focus of your care needs to be in making sure they are mentally and physically stimulated. Although you don’t need to go out and buy a herd of sheep for your Aussie, you will need to keep them very busy.

In many ways, this makes them the perfect adventure dog.

Australian Shepherds are high energy dogs with incredible endurance, so they need plenty of exercise and training. We’re talking 30-60 minutes of high-intensity exercise a day as a minimum for this dog — think chasing a Frisbee long distances or fast runs in the park.

Some owners find that taking their Australian Shepherd swimming is an ideal form of exercise too.

A bored Aussie might become destructive in the house or even start barking loudly, so it’s important to identify suitable exercise for them early on in your relationship.

Aussies love having a job to do — it’s in their nature to work — so your exercise regime needs to include mental stimulation too. This could include:

Intelligent dogs do not always make for easy training — Australian Shepherds are no exception.

Being a highly intelligent breed of dog, Aussies can be challenging for first-time owners to train. But, because of their instinct for work and interest in mentally challenging activities, with the right hand at the tiller, many Australian Shepherds can be highly trainable.

You’ll quickly find that your Aussie is highly individual — in fact, all Australian Shepherds are super variable with their temperament and even their drives.

It’s important to take into account their personal preferences when training your Australian Shepherd. While some Aussies are eager to please their owners, others can be stubborn and aloof when it comes to commands.

A particular focus of your training with Aussie pups should be:

An important point to remember when training your Australian Shepherd is that they are problem solvers, and this has positive and negative implications for your training.

Being highly thoughtful dogs it’s possible to train Australian Shepherds to an advanced level with the right techniques. However, it’s important that when training an Aussie pup you understand their thinking patterns.

As independent thinkers, Aussies will take opportunities that many other dogs will not — they will jump over a fence rather than sit behind it and search through your cupboards, even open bags, rather than wait to be fed. With this in mind, your training needs to be as sophisticated as their intelligence.

Australian Shepherds tend to be a fairly healthy breed. Because of their love of the outdoors and adventure, they are generally very fit dogs.  They have an average lifespan of 13 to 15 years and with the right care are generally exceptionally healthy dogs.

All purebred dogs come with a selection of conditions that are more likely to occur in that breed.

Australian Shepherds are not exception, and knowing about these common conditions can help you check for them in your pup. Common Aussie pup health issues can include:

Things to Know About Australian Shepherds

Australian Shepherds were bred to work.

They’re incredibly agile, intelligent, and high energy dogs. This dog is not going to suit you if you don’t have the ability to maintain their active lifestyle outdoors.

While Aussies can thrive in cities, their need to exercise means they’re not ideally suited for apartment living.

Your Aussie isn’t going to wait around for somebody else to fix a problem.

You’ll find that when they are faced with a challenge, they will find the opportunity to fix it for themselves — even if this means unzipping your bags in a hunt for food.

3. They Can Naturally Have No Tails

When you have a working dog around machinery and livestock, tails can sometimes get in the way.

To avoid injury to their dogs, old time Shepherds would either dock their dogs’ tails or attempt to breed this trait out of their dogs.

While docking is no longer common, because of selective breeding around 1 in 5 Aussies are born with a naturally bobbed tail and show dogs are expected to have either docked or naturally docked tails.

4. They Often Have Two Eye Colors

A nickname for this breed was once the ‘ghost eye dog’ because of their distinctive eyes and the belief that their looks held power.

Most people think their eye color is linked to their merle (speckled) coloring but regardless of origin it’s what makes them such an unmistakable breed to look at.